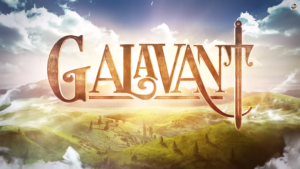 On the drive in to work this morning, it abruptly hit me that the second season of Galavant is just around the corner. The cast and crew have been hard at work for months on this second season. I am actually surprised that ABC has not yet to release this onto DVD, let alone on Netflix. So far, the only legal options are to purchase either a single episode and or the entire first season on Amazon. I do suppose you can do so on iTunes, after all, that is where yours truly purchased a few songs from the show. Now for those who have never seen- let alone heard- about this fine commodity…you have no idea what you’re missing out on!

Rewind to this time last year. ABC Studios aggressively promoted Galavant as a “filler” for its other fairy tale- esqe show, (of which I am madly in love with), Once Upon a Time. This went on for months and made people like myself greatly interested in seeing what all the hype was about. And boy let me tell you, it did not disappoint.

Galavant is most certainly a cross between Monty Python and Robin Hood: Men in Tights. That being said, this show easily stands on its own two feet and should be nominated for several Emmy awards. It has well-crafted musical numbers, breathtaking sets, a phenomenal cast & crew – basically, everything that a show should have.

ABC’s Galavant takes place in a fictional kingdom somewhere around the 12th century. As with all great tales, the story follows the adventures of “Galavant” (John Sasse), a well-known knight. And he has everything that a guy could ask for, including a drop dead gorgeous girlfriend by the name of Madalena, (Mallory Jansen). Then one day, the perfect couple are out shopping at the local market when the (semi) evil King Richard (Timothy Omundson), abruptly kidnaps the lady fair. Enraged by this, the heroic Sir Galavant gives chase to rescue his true love.

Why You Should Watch It:

If you enjoy watching musicals and laughing your behind off, this show is for you! Honestly, the initial teaser trailer for Galavant did not do it justice. I really only started watching this show because I was mildly intrigued by the idea of a, “musical comedy.” After the first episode aired, I was quite hooked on Galavant. Yeah sure, there have been other television shows that contained a musical back bone, (think “Glee”). However this show is different, this one strikes the perfect combination of slapstick humor and a feature film worthy soundtrack.

The superb cast may have something to do with the overall success of the show. But if we are being honest here, everyone knows that it’s the dedicated team of writers who are responsible for the overflowing abundance of success. No, no, that is still not right. I firmly believe that “Galavant” owes its success to every last person involved in the creative process. That being said, I strongly encourage your viewing this show. It has humor, drama, singing, dancing, breaks-the-fourth-wall on a constant basis, and oh yeah, a cast that’s easy on the eyes. What more could you ask for in a show?

Below is a list of where one can legally acquire the first season for thine viewing pleasure. Only if you want to…no pressure. Should you decide to accept this offer, there are only a few months left before season two kicks off in January!

Now that you know what “Galavant” is about and where to find it; the time has arrived to ride off into the sunset. To find more information/ watch the hilarious bantering back and forth between the show’s cast & crew, follow their Twitter.

@GalavantForUKTV – Galavant needs to air in the UK!

Galavant returns in January 2016 on ABC. Check your local listing